So With arguably the biggest Comic Movie of all time rapidly approaching its about time we dust off the tinfoil hats and start widely speculating about how the Avengers final throw down with the mad titan will go. Whilst we’ll look at all manner of theories from across the internet in the run-up to the film I wanted to kick things off with my own personal theory.

I’m going to try and explain not only why Dr. Strange sacrificed the Time Stone but why he did it for Tony and why he and Scott Lang will be crucial to defeating Thanos. 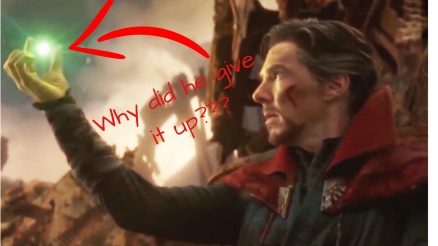 So, a quick recap of Infinity War. Strange specifically told Tony on their way to Titan that he wouldn’t hesitate to let him or Peter die to protect the Time Stone because it was just that important. Then, Strange use’s the Eye of Agamotto to sift through 14,000,605 different possibilities with our heroes only winning one. The fight ensues, everyone’s on their A-game but it’s just not enough. Tony gets impaled by Thanos and is about to die when strange does the unthinkable. He willingly sacrifices the Time Stone to save Tony’s life. This leads to Thanos being able to reverse time, get the mind stone and well…you know the rest.

We know everything Dr. Strange did and didn’t do was to ensure that one possibility where they win happened and that includes sacrificing the stone and half the universe to save Tony. But why is Tony just so important? Well, to answer that question we first need to go to Ant-Man and the Wasp. I know I know, hear me out.

In the films post credit scene before Scott enters the Quantum realm the original Wasp Jannet Van Dyne warns him to avoid Time Vortex’s whilst he’s inside. Then shortly after she, Hank and Hope all get dusted. We know Time Travel was going to play a key part in Endgame and I think they’ll do it through the Quantum realm. Our heroes may enter the Quantum Realm in 2018, get sucked through a Time Vortex and exit the Quantum Realm in say 2012. Explaining how Ant-Man and modern-day Tony could be at the battle of New York from Avengers 2012. (Thanks to those set leaks). Dr. Strange visited the Quantum Realm, if only briefly, in his own solo outing back in 2016 so it’s not unreasonable to suggest the Sorcerer Supreme already new of the Time Vortex’s inside and how they could be used. It’s also fair to suggest Strange new of Lang and his travels through the Quantum Realm once he looked into the future.

“But Ant-Man can already travel through the Quantum Realm so what does he need Tony for?” I hear you asking. Well, thanks to the most recent Endgame trailer we see our heroes suited up in nice shiny new white and red suits, looking not to dis-similar to Hanks own Quantum realm suit. Closer inspection tells us these suits look like they are modified Ant-Man suits. With Hank and Shuri both dead from the snap I’d say there’s only one person alive smart enough to develop and build a suit capable of allowing people to travel through the quantum realm. Tony Stark.

Tony needed to survive in order to get to earth, build the suits for our heroes allowing them to enter the quantum realm and travel through a time vortex in order to go back in time and snatch up the stones before Thanos can ever get his hands on them. Going back to the battle of New York, I think the two stones there are instrumental in finishing Thanos off. The Mind Stone is in Lokis scepter and was the final stone which ultimately allowed Thanos to snap away half the universe. Getting to it first and changing the course of History could prevent Thanos from ever snapping in the first place.

Plus we know from the Ancient One that even if you look through time you can’t see past the point of your own death. She says herself that she sees up to a certain point but never beyond it. That point is the point at which she dies but if Dr. Strange saw our heroes win he must have seen past the point he turned to dust meaning his unfortunate end won’t be permanent.

There’s still plenty of room to expand and theorize here but that pretty much sums up the premise of this theory. Strange new he needed Tony alive in order to build the quantum Realm suits and travel back in time through a time vortex to get hold of at least one Infinity Stone undo the snap. let us know below what your thoughts on this theory are. Personally, I don’t think Dr. Strange would ever willingly give up the Time Stone unless he knew for certain it would lead to a victory. But, maybe you have some other ideas as to why Strange gave up the Time Stone. Or, maybe you’ve got your own theory about why Tony needed to be kept alive. Be sure to let us know down below or over on Twitter and if you’ve seen a theory you’re dying to share let us know and I might just feature it in the future.