His name is Stark and he’s a genius industrialist and scientist who’s using his brilliant mind to help those in need around the world. The only difference is, this Stark doesn’t fly around in an Iron Suit. Tony Stark: Iron Man issue #5 stars Arno Stark, the son of Tony’s adoptive parents Howard and Maria Stark. Arno was always desperately ill being kept in an intensive care unit for most of his life but now he’s back on his feet and he isn’t wasting any time getting to work.

This Review will contain spoilers. 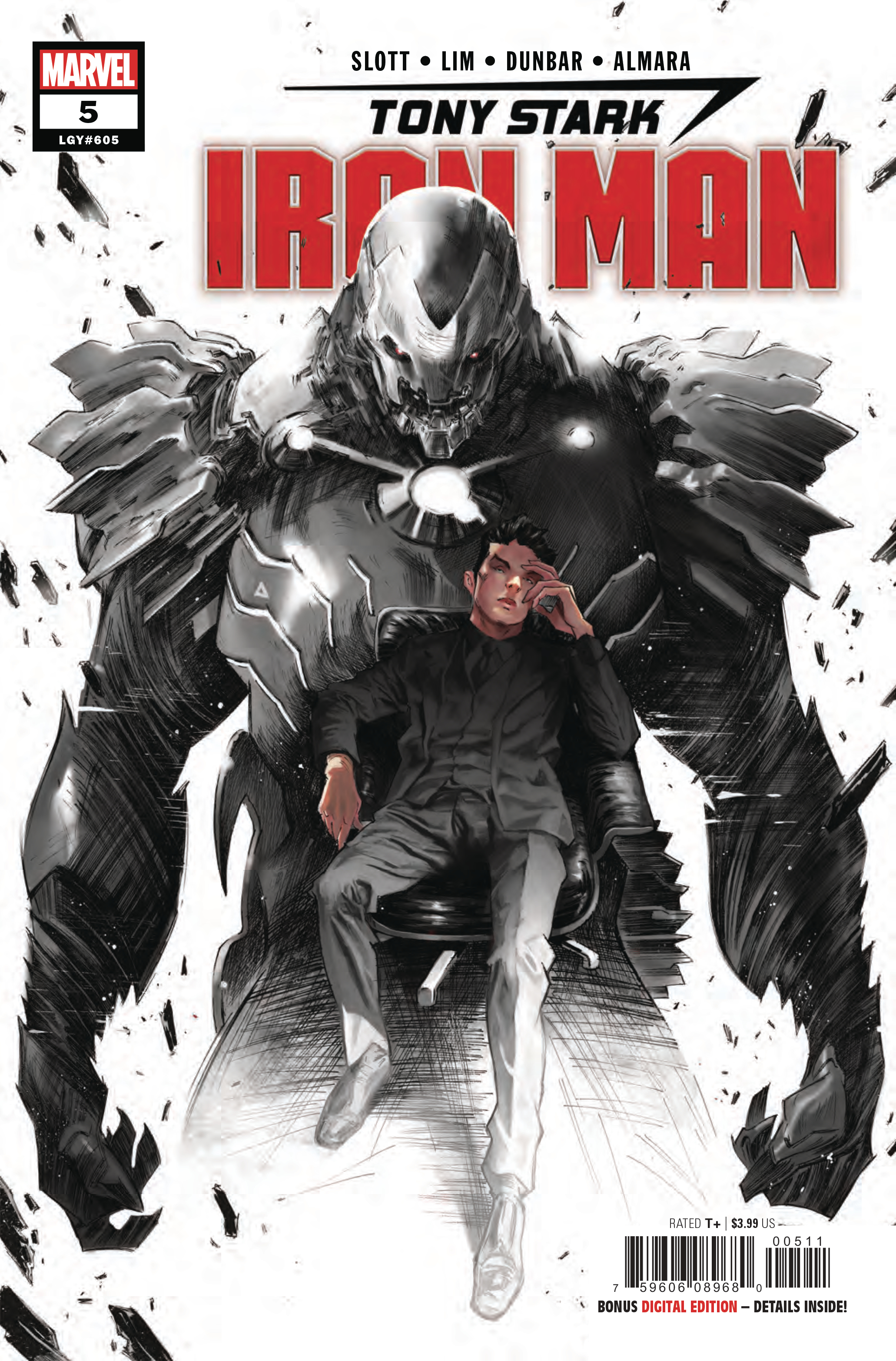 Tony Stark: Iron Man #5 written by Dan Slott with artwork from Valerio Schiti, Edgar Delgado and, Joe Caramagna doesn’t star Tony at all, even despite its name. In fact, it doesn’t star any of our favorites from the previous 4 issues at all. This is going to be a love it or hate it sort of issue for most people. The absence of Tony, Jocasta, Andy, and so many others really does show throughout and could be a major distraction for some readers, especially those who don’t know much about Arno as a character. Luckily for this issue, Arno is fantastic and pretty much carried the entire story on his back. He’s just as smart as Tony, possibly even smarter at times but his personality and his outlook on life are so twisted compared to his brothers. They avoided making Arno feel like “Evil Tony Stark” but they do feel like opposites throughout even without Tony being there. We see glimpses of Arno using remarkable technology to solve remarkable problems including planting crops in water-deprived deserts and even allowing a musician to play again after losing his arm, quickly giving him a  replacement one. He has a certain cockiness to him, not too dissimilar to the likes of Tony or even Dr. Strange before his own car crash but when he produces the results you can hardly blame him for having an ego.

The issue begins to pick up the pace when a farmer, with genetically engineered livestock contacts, Arno asking him to fix a problem with his cattle. The Cattle have no brains, no feelings or emotion. They are literally just walking meat and very disturbing walking meat at that. These cows allow people to eat the best steak and have a clear conscience. Turns out they aren’t quite as brain dead as the framer made out, seen as random cows will charge towards people for seemingly no reason. Arno easily corrects the problem connecting the cows together as a herd using computer chips, the only problem is now as a herd they are much smarter. And way more deadly. Arno survives the oncoming stampede but leaves the farmers to die in a truly brutal fashion which finally shows off his vindictive and evil side.

The issue wraps up with Arno meeting up with Baintronics, an adversary we’ve previously seen in Tony Stark: Iron Man as we see all of his previously brilliant ideas fail one by one. I really enjoyed the way this issue ended even though I found the overall plot to be a little subpar. Seeing Arno’s ideas fail really does separate him from Tony showing how he might be smart but he isn’t THAT smart. Despite that, he still feels like he could be a genuine threat to Tony in the future, espcially when teaming up with Baintronics so I’m excited to see more from his character in upcoming issues.

The issue’s plot wasn’t anything special, but instead shined through Arno himself. I did not appreciate the fact that all of our characters and the Controller plotline were completely missing from this issue. At this point, the stuff with The Controller feels like a sub-plot and one they need to turn around drastically in the next issue.

Like I said this is Arno’s issue, so much so he is the only real character who gets any development. As a villain, he already has some pretty strong foundations. A troubled background due to his illness and being forced to grow up in Tony’s shadow, he seems like a genuine threat to Tony due to his brilliant mind and, he is shown to be utterly ruthless throughout. I really can’t wait to see him and Tony interact or even face off against each other. Baintronics don’t really make a great impression here, only showing up near the end, and still feel rather lackluster to me. everyone else is pretty much a side character and honestly not really worth talking about.

Once again, this issue looks absolutely fantastic. I really like Arno’s look and yet again all of the tech he uses has the great futuristic look to it. The genetically engineered cows were what stole the show here surprisingly.  They have this grotesque look to them which not only made them seem creepy but also a little vulnerable at times, espcially when they were basically called walking meat. You start to feel sorry for them, that is until they crush a house full of people to death.

Tony Stark: Iron man issue #5 felt like a real mixed bag to me. On the one hand, I really loved Arno’s introduction and can’t wait to see him in the future, but on the other, the lack of any other decent characters and The Controller plot being completely dropped made the issue feel a little lackluster. At least we can, hopefully, look forward to Arno being a main villain in the series later down the road.